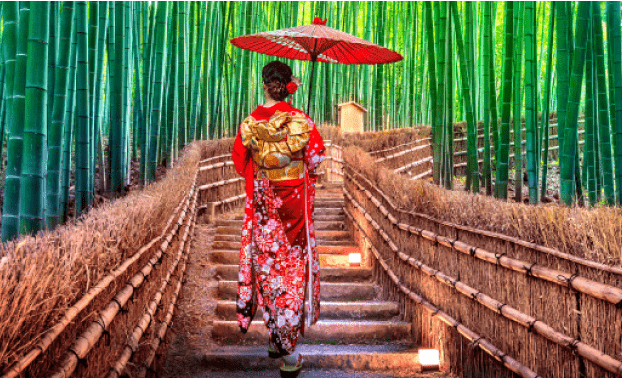 If I were to tell you our destination pick this week is often referred to as “The Land of the Rising Sun” would you have guessed I was referring to Japan? Many centuries ago, it was given its nickname by people in China because when they looked east to Japan, they looked in the direction of the rising sun.

In Japan, the past meets the present and creates one of the most intriguing fusions of a modern society. This is one of the reasons why so many travellers – myself included – are drawn to this fascinating land on the other side of the globe.

“Japan is the most intoxicating place for me. The Japanese culture fascinates me: the food, the dress, the manners and the traditions. It’s the travel experience that has moved me the most.” – Roman Coppola, filmmaker.

My daughter and I travelled on a cruise vacation in Japan a few years ago, and totally enjoyed it. My writing today depicts the places we visited hope you will enjoy it!

Tokyo was one of the cities I included in my Cities of The World essay, but here is a summarized version if you missed it the first time.  Prior to 1868, Tokyo was known as Edo. A small castle town in the 16th century, Edo became Japan’s political center in 1603 when Tokugawa Leyasu established his feudal government there. A few decades later, Edo had grown into one of the world’s most populous cities. With the Meiji Restoration of 1868, the emperor and capital moved from Kyoto to Edo, which was renamed Tokyo (“Eastern Capital”).

Tokyo is known for its shrines which you will see all around the city. Inari Shrines are the most familiar ones, Toyokawa Inari Tokyo Betsuin is the one I visited on my last visit there. It is said that, in ancient times, the third son of Emperor Juntoku underwent a spiritual experience in which the deity Dakini-Shinten appeared on the back of a white fox with a rice plant slung over his back. The prince embodied this experience into the statue of Dakini-Shinten. The statue was later brought to the residence of Ooka Echizen-no-kami (Akasaka Hitotsuigi, Tokyo) during the Edo era, and was finally enshrined in Toyokawa Inari Betsuin at its present location in 1887.

The temples and zen gardens are incredibly beautiful and if you enter them you really can experience how peaceful and magical these places actually are. The best thing about it is that you can find them almost everywhere!

Perhaps the most known fact about Hiroshima is indeed the fact that it is the first city in history to suffer a nuclear attack when more than 140,000 people died. To pay tribute to this dark part of Hiroshima’s history, plan to visit the Peace Memorial Park and the Hiroshima National Peace Memorial Hall for the Atomic Bomb Victims. Although the site is a somber symbol of a very dark stage in our world’s history, the park itself is surprisingly pleasant and inviting. On my visit there, we had met a survivor of the 1945 Hiroshima atomic bomb who didn’t speak much of the gory details of the disaster but made it very clear that Japanese people openly welcome visitors from all over the world and that the past is just that. It was touching to see how a tragedy of such scale can lead towards hope for a peaceful future for future generations.

This historic city known as the food capital of Japan and often referred to as the “nation’s kitchen”. This is perhaps because Osaka has been the center of Japan’s trade for centuries, and it is here that traders used to stop to pick up supplies on their way home. In current times, Osaka is the home to some of Japan’s best food, most unique fashions, and friendly locals. The people of Osaka are known as Japan’s friendliest and most outgoing.

A must visit here is Osaka Castle, originally built in the 1580’s, and almost fully reconstructed and modernized in 1931. It is Osaka’s most significant historical site and is surrounded by a beautiful peaceful garden. A beautiful testament to traditional Japanese architecture, Osaka Castle is one of the most photographed architectural landmark in Japan.

Shimizu is considered one of Japan’s most beautiful ports. It is easy to see why: the view of Mount Fuji is breathtaking, although not guaranteed. The highest mountain in Japan, standing at 3,776 m high (12,389 ft), it is the seventh-highest peak on an island in the world. Mount Fiji is also a volcano that last erupted in 1707.

Another attraction in Shimizu is the pine tree grove known as Miho-no-Matsubara,

home to a 650-year-old Japanese black pine. Because of its beauty, Miho no Matsubara has been chosen as one of Japan’s three most celebrated scenic locations and It is also a registered UNESCO World Cultural Heritage Site.

Sushi connoisseurs will be happy to learn Shimizu is where Japan’s first Sushi Museum was opened. In addition to tuna, for which Shimizu has the number one spot in Japan, other local delights include sakura shrimp (a small, crunchy variety found only in the area) and young sardines called shirasu.

Easily one of Japan’s most beautiful cities, Kyoto’s astonishing number of temples, shrines, and palaces make it its most famous feature worldwide. Most of Japan’s traditions and arts started in Kyoto, such as the tea ceremony, Zen, Kabuki theater, Tantric Buddhism, making it Japan’s capital for more than 1,000 years.

A must visit here is Kiyomizu-dera temple in the city’s eastern mountains, and the Fushimi-Inari Taisha with its shrine pathway through a miles-long chain of towering vermilion gates. Worth visiting is also the famous Giouji Temple one of the most scenic spots of this area, overlooking the moss covered grotto.

No visit of Kyoto is complete without a walk in the vibrant Gion neighbourhood, known as Kyoto’s Geisha district.

When I think of Nagasaki, I think of the Glover Gardens, with its complex of

19th-century Western style houses perched on top of the hill of Minami-Yamate. You can imagine the stunning view of the harbour visitors are treated to.

The main attraction is the 1863 mansion of Thomas Glover, a prominent Scottish merchant who introduced steam locomotives and industrial coal mining to Japan.

Nagasaki is also the second target of the atomic bomb in World War 2, when the city was attacked at 11.02am on August 9, 1945. I visited Peace Park and the Nagasaki Atomic Bomb Museum dedicated to the events that took place in 1945.

Go up the stairs to the beautifully laid out garden, with its Peace Fountain, the famous Peace Statue, and with memorials for peace donated by different countries all around the world.

With this, I conclude my look at Japan and why I think it’s worth a visit. There are many more places to see there and many different experiences to have. Staying at a ryokan,

With this, my essay of Japan concludes. There are many more places to see and different experiences to have, allow yourself two weeks for a more complete discovery. Stay at a Ryokan, a traditional Japanese inn, for a couple of days either before or after a cruise vacation. Participate in tea ceremony, visit a Sumo wrestling event, and pick up a Ramen cooking class, or better yet saki making and tasting to be sure to truly experience Japanese culture.

I recommend watching the old classic movie Sayonara which Marlon Brando starred in back in the 1950’s or perhaps listening to Madama Butterfly opera, both describing the cultural differences between the East and the West during that time. And if reading is your favourite past time, check out Memoirs of a Geisha, a brilliant novel written by Arthur Golden. Enjoy!!

Keep an eye out for our next email with our recommendation for a cruise vacation in Japan coming to your inbox later this week.