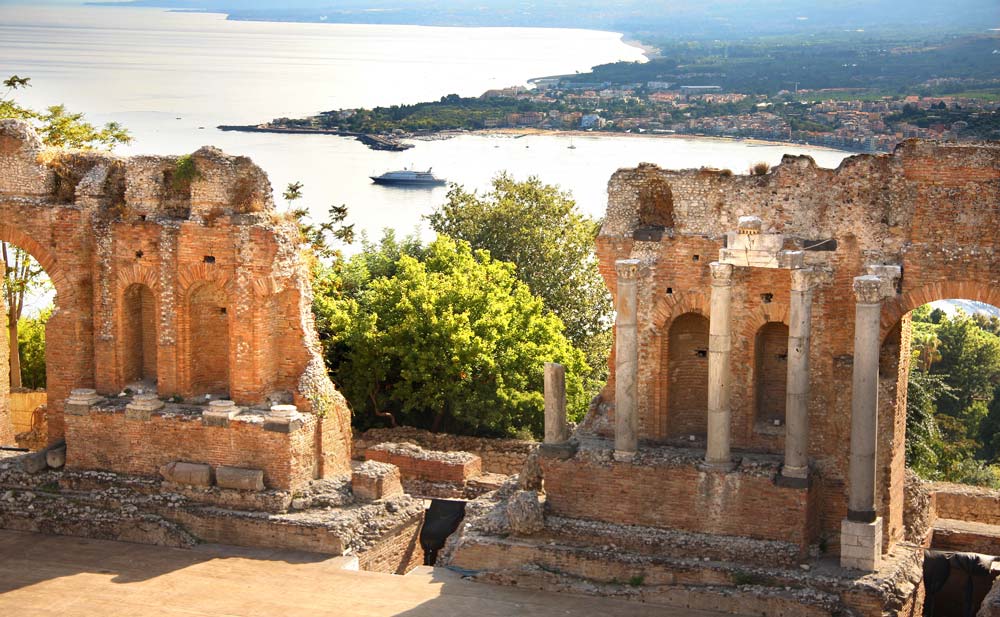 This week we journey to The Islands of the Mediterranean. It is hard to imagine a more alluring destination than the Mediterranean region. Here await incredible beauty, rich history, culture thousands of years old, flavourful cuisine, and the widest variety of most aromatic wines.

Did you know there are a total of 190 islands sprinkled across the sea? Albania, Croatia, France, Greece, Italy, Malta, Spain, Tunisia and Turkey are the proud owners of these jewels in the sea, with Greece owning an impressive total of 166 inhabited islands, 47 are owned by Croatia, 25 by Italy, and the rest belong to Spain, Turkey and so forth.

You have most likely travelled to, or have heard of Santorini’s glorious sunsets, Mikonos’s whitewashed windmills, the unspoiled beaches of Zakynthos… These are one of the best known and most frequented Mediterranean islands. In our pursuit for destinations less travelled, today we will journey to four of the largest islands in the Mediterranean, and likely also the least travelled. Malta, Sicily, Sardinia, and Corsica are located off the coast of Italy, each with its own unique beauty and appeal.

Malta is as beautiful and resilient as any mighty country is. It’s turbulent history dates back to 5900 BC and its land has been conquered by almost every empire throughout most of its 7,000 years of existence. Phoenicians and Carthaginians, Romans, Greeks, Arabs, Normans, Aragonese, Knights of St. John, French, and British – all have left their mark on the country’s ancient culture, evidence of which is prevalent in its architecture, language, customs, food…all of which makes Malta one of the most diverse Mediterranean island nation.

Malta of today is a popular tourist destination with pleasant climate, beautiful beaches, and architectural and historical monuments, including three UNESCO World Heritage Sites and seven megalithic temples which are some of the oldest free-standing structures in the world.
Joe and I called on Valetta during a cruise through the Suez Canal which took us from Rome to Dubai and were really impressed by its natural beauty and resilient history. This open-air museum of a city will truly impress you with its whitewashed facades on baroque and Arabic – style buildings, steep uphill roads and spectacular views of its marina.

Two of the must-see places in Malta include the temples of Hagar Qim and Mnajdra, a complex archeological site that dates back to 3,600BC.

Plan to also visit Mdina, Malta’s old capital, and lose yourself strolling down the maze of cobbled streets. Malta’s old Capital has been known under a range of different names based on its rulers and its role over a span of 4,000 years since it was founded.

Its second biggest island, Gozo, and its tiny sister island Comino, offer some of the best swimming, snorkeling and diving in the Mediterranean. Explore the famous Calypso Cave, take guided hikes, and visit the ancient fortifications and the baroque architecture of the Knights of St John, the famous Knights of Malta.

And before you end your visit, be sure to have a taste of Maltese cuisine, a delicious bland of Italian, Spanish, French, and Middle Eastern flavours. My personal favourites are two desserts Malta is best known for: the ricotta-filled Kannoli and Helwa tat-Tork, sweet, sugary mixture of crushed and whole almonds.

Sicily holds the attribute of the largest Mediterranean island as well as the island richest with history that spans over thousands of years. Located between Europe and Africa it has always been the beacon for migrants and a prised possession for expanding empires. The first time I visited Sicily was on a Mediterranean cruise from Venice to Rome. Although I had read about Sicily’s past history prior to my visit, I was truly impressed by the grandeur of its archeological sites with perfectly preserved ancient Greek temples and theatres. The impressive Valley of the Temples in Agrigento is the world’s largest and best-preserved archeological site, a UNESCO member since 1989.

But my personal favourite place in Sicily is Taormina, often referred to as the Pearl of the Mediterranean. It is here you will find the Teatro Antico, built around the 3rd century BC, overlooking the Gulf of Taormina with spectacular views of Mount Etna.

But of course, Sicily has much more to offer to us travellers than just its history, its culinary experiences are equally as satisfying. On your next visit, be sure to taste Cassata, a traditional cake prepared with fresh local ricotta cheese and Granita, deliciously flavourful ice cream…Sicily is also world renown for its almonds, red oranges, pistachios and other staples of the Italian cuisine.

Situated in the middle of the Mediterranean Sea, Sardinia is the second largest island in the region. It is an island of contrasts: from steep forested mountain picks to white sandy beaches and from desert-like areas to marshes inhabited by dear… and not to forget the 4 million sheep roaming the island…When my daughter and I visited Sardinia a few years ago, we were quite taken aback by its raw, untouched beauty.

It is an island scarcely populated, a perfect getaway for celebrities from all over the world looking for a vacation away from the crowds and paparazzies. Many luxury hotel chains have properties here catering to discerning clientele with deep appreciation of high-end Italian merchandise.

To the north are coves accessible only by boat or on foot, like Cala Luna, Cala Sisine, Cala Mariolu and Cala Goloritzé.

Costa Smeralda (Emerald Coast) with Porto Cervo (Old Port) is considered the most modern port in the Mediterranean Sea and it has been named one of the most expensive resorts in the world, attracting most luxurious yachts and catering to billionaires from all around the world.

Porto Rotondo is another exclusive place famous for its fairy tale beaches, luxurious resorts and villas, high-end shops and bustling night-clubs.
The pristine beauty of its coves and the crystal-clear water of the sea have made it one of the most beautiful and exclusive vacation destinations in the world.

While Sardinia lacks the opulent architectural heritage that Sicily has, it is indeed famous for a very unique site, the settlement of Nora, an ancient port established by Bronze-Age Nuragic people, also inhabited by the Phoenicians and Romans later on.

Sardinia’s sole UNESCO archeological heritage site, Su Nuraxi, is a settlement consisting of a seventeenth century BC Nuraghe, a bastion of four corner towers, and a village inhabited from the thirteenth to the sixth century BC, developed around the Nuraghe.

On my visit here, I was quite taken aback by how well preserved the dwellings were.

Like in Sicily, Sardinia’s culinary experiences are not to be missed. Pecorino Sardo is the island’s world- renown sheep cheese; have a piece of Pecorino and wild boar porchetta with a slice of traditional Pane carasau bread and savour it all down with a glass of Cannonau-simple and delicious.

Corsica is the fourth largest island in the Mediterranean, one of France’s best-known, undoubtedly as the birthplace of its most famous citizen, Napoleon Bonaparte. The famous stateman and conqueror was born here in 1768, the same year the island officially became part of France, after being ruled by Genoa for almost 500 years. Napoleon Bonaparte was born in Ajaccio, Corsica’s capital city, and today his ancestral home, Maison Bonaparte, is a visitor attraction and museum.

Corsica lies off mainland France’s southeastern coast, and the Strait of Bonifacio separates it from Sardinia. It is believed to have been formed 250 million years ago and is often referred to as the “mountain in the sea” because of its mountainous nature. Corsica is one of the most mountainous islands in the Mediterranean with its highest peak 8800 feet high which makes for a stunningly beautiful dramatic landscape.

Visitors are treated to sparkling bays and breathtaking beaches, thriving coastal villages and towns and raw mountain peaks with traditional villages sitting atop. They can be hiking one day, kayaking the next, swimming, sailing, and taking in all that this remarkable island has to offer.

And yes, there are historic and archeological sites to visit too, one of which is Filitosa, a megalithic site dating back some 6,000 years. You can easily spend an hour browsing through this open – air museum of vestiges of ancient monumental enclosures!

Why not venture out to the south and discover the medieval town of Bonifacio sitting atop dramatic cliffs on the southernmost tip of Corsica. Bonifacio is the oldest town on the island dating back 830 years in history with its Old Town sheltered by a 9th century citadel. Here await streets lined up with boutiques and galleries, cafes and restaurants and the most spectacular views of the harbour.

I am yet to travel to Corsica, so I cannot recommend culinary delicacies based on my own personal experiences. But this I know: Corsica is best known for its charcuterie. From coppa to lonzu through prisuttu, you have to taste it all. Combine it with brocciu, Corsican goat (or sheep) cheese, and you have yourself a most delicious culinary treat.

And, with this I conclude my rather long depiction of these four most beautiful of Mediterranean islands. If you are like me, you probably have travelled in the Mediterranean region before and you are looking for something different to see and to experience. Although I have visited three out of the four islands, I cannot wait to go back.
Yes, the best way to travel to these beautiful islands is by ship. I have hand-picked this itinerary and invite you to join me on a very unique “yachting” experience in this beautiful part of the Mediterranean. I promise you a vacation to fulfill many a yearning for a satisfying summer holiday filled with history, culture, fun in the sun and delicious pleasures for the palate. All in the luxurious accommodations of a super comfortable yacht, having packed and unpacked only once. We will traverse the islands and take it all in during this (almost) all-inclusive 10-day cruise.

Stay tuned for my next Destination Series Report coming your way.
No doubt it will highlight another bucket list destination for us to explore.