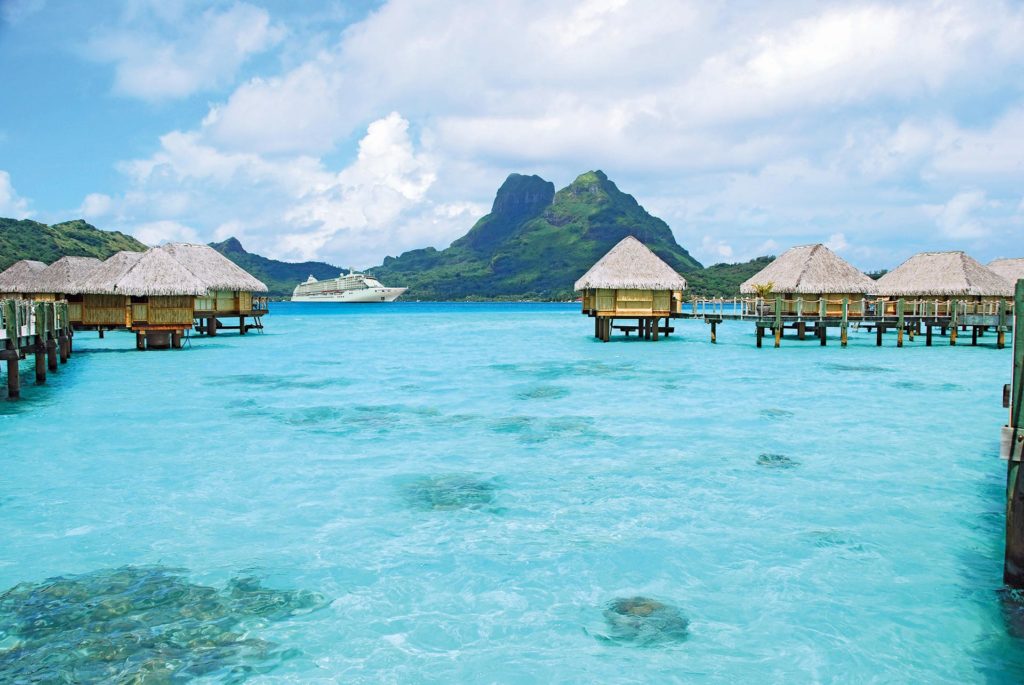 The history of the islands of Tahiti is a rich and fascinating one. Around 4,000 BC, a great migration began in Southeast Asia with early settlers travelling across the vast, open ocean to explore the Pacific Islands. European explorers, traders and whaling ships all travelled through Polynesia. The first explorer to reach the region was the Portuguese explorer Pedro Fernandes de Querios who discovered the island of Rekareka. He was followed by the Dutchman Jacob Roggeveen who charted six more islands in the Tuamotu Archipelago and two islands in the Society Islands, one of which was Bora Bora.

The British and French also sent out their explorers, one of whom was James Cook who sailed the Pacific three times before he was killed in Hawaii. But perhaps the best-known voyage to Tahiti, thanks to Hollywood, is the 1787 voyage on the British ship HMS Bounty, sent to the South Pacific under the command of William Bligh to bring a cargo of breadfruit to the West Indies. Only the mission was never completed because of the mutiny triggered by the unbearable on-board conditions imposed by Captain Bligh.

If you haven’t seen it already, be sure to watch Mutiny on the Bounty filmed in 1962 starring Marlon Brando. While filming on location, Brando fell in love with the islands, and his co-star whom he later married, and bought an uninhabited island just north of Tahiti. The island of Tetiaroa is where the luxurious resort Brando was later built.

In 1942, the French took over the islands and established a French protectorate that they called Etablissements Francis d’Oceanie (EFO) -French Establishments /Settlements of Oceania.

In 1946, Polynesians were granted the right to vote through citizenship and in 1957, the EFO were renamed  French Polynesia. Most recently as of 2004, the country has been designated as an overseas country and has its own President of French Polynesia.

Tahiti is the largest island of French Polynesia and Papeete the proud capital of both, Tahiti the island and French Polynesia the country. It is surrounded by majestic peaks all around its interior and sparkling sandy beaches along the coast. Beautiful, lush valleys, streams falling down the edge of cliffs, and lush vegetation make the interior of the island look almost untouched. Tahitians live mostly near the shore and the bustling capital of Papeete. The word Papeete means “water basket,” and was once was once a gathering place where Tahitians came to fill their calabashes with fresh water.

Papeete today boasts world-class Tahiti resorts, hotels, spas, fine dining and unique restaurants, nightclubs, vibrant markets, museums, pearl shops, and boutiques. Speaking of pearls, Tahitian Pearls range in colour, and although known as “Black Pearls” they can be green, blue, purple…and they can range in size and shape, and of course price.

Moorea is probably the lushest and greenest of all the islands with its peaks majestically towering the ocean. Waterfalls, soft meadows, blue lagoons….it has it all. Pastel-painted houses with gardens of hibiscus and birds of paradise, and one of the happiest people you have ever met. La vie heureuse, as they say in Tahiti, a happy life. Here, I took in a glass-bottom boat excursion to the inner reef surrounding the atoll, where I watched lagoon rays and lemon sharks. We spent a day at the InterContinental resort and we swam, walked along the beach, and enjoyed local delicacies for lunch….Ahhh, there is something to be said about life in paradise…..

Located just 11 miles Northwest of the island of Tahiti, it is easily accessible by ferry or short plane ride from Papeete. It is small in comparison to Tahiti, but only by size, not by beauty. Many travellers will tell you Moorea is the most beautiful of the Tahitian islands, and they probably are not wrong. Moorea vacation is ideal for any couple or family at any of its small island overwater bungalows or international resorts.

Top things to do in the island of Moorea:

Called Pora Pora Mai Te Pora in Tahitian, Bora Bora really lives up to its name which in English translates to

“Created By The Gods”.. When explorer Jacob Roggeveen first landed on the island with the rest of the European settlers back in the 1720’s, he shortened the name to Bora Bora, which has stood ever since.

When I first visited Bora Bora, I felt as if I had landed on another planet. Its surroundings felt so out-of-this-world to me, so unspoiled and untouched by civilization.

Formed by an extinct volcano, Bora-Bora is surrounded by a lagoon and coral barrier reefs which protect the island from the open sea. Two summits dominate the island: Mount Otemanu (727 m) located in the center of the atoll and Mount Pahia, on the main island (661 m).

With a lagoon of turquoise waters resembling an artist’s palette of bright blues and greens, the island makes you fall in love with it at first sight. And why wouldn’t you? Lush tropical slopes and valleys with hibiscus, powdery white sand beaches, and sparkling blue waters teaming with tropical fish and giant manta rays are all around you. The lagoon is surrounded by a string of motus, small islets, which is where the luxury resorts are scattered around providing the most secluded romantic vacation experience possible. On our last cruise to French Polynesia, Joe and I spent a day at the InterContinental resort in Bora Bora – a day forever edged in our memory. On our way back to our cruise ship, we stopped at the world-famous Bloody Mary’s where many a celebrity have stopped for delicious seafood dining.

THINGS TO DO WHILE VISITING

You can do as much or as little during your visit in paradise. After all this is your vacation and time to relax and rejuvenate. The French Polynesian cluster of islands share a delightful blend of Polynesian and French cultures, and a most pleasant tropical climate. From the Bora Bora overwater bungalows to a true Tahiti surf experience in Moorea, or sipping Tahitian noni juice and trying local Tahitian foods at Papeete’s market on Tahiti Island…all these are experiences not to be missed when travelling this region.

On both of our visits there, Joe and I arrived a day early which gave us an opportunity to attend an evening Polynesian Culture show, filled with music, dance and delicious local delicacies. We took in scenic drives around the islands, which usually included photo stops at the highest spots offering spectacular views of the surroundings. We visited local arts and crafts shops and galleries, we learned about the tedious hand pollination involved in vanilla growing, we observed how pearls are cultivated in the turquoise lagoon. My favourite experience was our catamaran cruise in Bora Bora – it’s beauty now forever edged in my memory. For travellers seeking a more adventurous experience, there are opportunities to snorkel, dive, hike, kayak, swim with sharks and alike…

ASK US ABOUT OUR NEXT VISIT TO TAHITI WHEN WE EMBARK ON OCEANIA CRUISES’ LEGENDS AND LAGOONS 10-DAY VOYAGE ABOARD THE REGATTA DEPARTING FEBRUARY 5, 2022

THIS VACATION IS NOT TO BE MISSED!

GET THE DETAILS ON LEGENDS AND LAGOONS HERE